This cozy cocktail is made with fresh apple cider and bold smokey bourbon. It's the perfect drink to snuggle up with on the couch next to the fire. Each sip is full of crispy sweetness paired with a little charred toasty flavors. If you're looking for a warm & cozy libation, this bourbon apple cider cocktail is it!

This Smoked Cinnamon Apple Cider Bourbon Smash Cocktail is sponsored by In The Raw. As always, all thoughts are my own. Thank you so much for supporting brands that make The Fit Peach possible!

It is that time of the year! Temps are dropping outside, fire places are in full use, friends and family are gathering, and the need for a good cocktail is at an all time high. Whether you're looking to cozy up next to the fire with a loved one, host a festive party, or need some liquid courage before the family comes rolling in for the holidays, this bourbon apple cider cocktail is the perfect drink to have in hand.

If you need something sweet to go along with this drink, check out my Gluten free Pumpkin Pie Brownies and Butterscotch Walnut Dark Chocolate Chip Cookies.

What makes this cocktail so good?

This is one of my all-time favorite cocktails! It's SO easy to make at home and perfectly pairs the traditional fall apple cider with comforting bold bourbon. With the addition of the the smoky cinnamon and thyme, it adds a little elevated twist to the drink that will make you feel like a pro bartender whipped it up just for you.

As someone who typically doesn't love apple cider, this is the perfect way to use it! There is just a splash in the cocktail, giving it a touch of crisp sweetness and fall flavors without being too overbearing. It also the ideal match to boozy bourbon. Even if you aren't huge bourbon person, you'll fall in love with this cocktail.

Wanna know the secret to this bourbon cinnamon apple cider cocktail? It's the homemade cinnamon agave simple syrup. It's easy to make at home and really brings this cocktail from wow to WOW!

If making simple syrup at home intimidates you, I hear you. But rest be sured, it's seriously so easy to make. We simmer a 1:1 ratio of In The Raw Agave Nectar and water with a few cinnamon sticks and outcome is a slightly thick simple syrup that's made slightly "health-ier". The agave nectar provides a rich and robust caramel-like flavor to this super easy simple syrup.

The best part about it is you can store it in a jar and easily throw it into your cocktails over the next few weeks and it gets even better with time!

How to make this cocktail smoky

I for one love a good smoky cocktail. It's an easy way to add a little complex flavor to the drink. You can do this right at home too and feel like you're at some swanky cocktail bar from the comfort of your couch!

Two disclaimers here - one, this drink is for those of legal age. Two, as you probably already know, be careful when handling anything with fire.

First, make sure you are using a dish you don't care too much about. Don't use a matte or ceramic plate as the ash will stain it. If you have one, a wood plank works best!

Take a fresh cinnamon stick and carefully run the tip over a hot flame. I prefer to use a lighter over a match stick as this may take a few seconds get the cinnamon stick to heat up.

Once the cinnamon stick is smoking a bit, place it on the plate (or wood plank) and place a cocktail glass over it so the smoke is trapped. Leave the glass like this until you are ready to pour in the cocktail! It's as easy as that!

If you find that your cinnamon stick isn't smoking well, try dipping the tip in a little of the bourbon. The alcohol will help it heat up and thus create the smoke.

Can I make this cocktail for a group of people?

This recipe will make 2 cocktails which will fit in a standard sized cocktail shaker. If you want to make this drink for more than 2 people, you will need to shake up the drink as directed, pour into 2 glasses, and repeat for however many drinks you want to make.

Is there a shortcut to making the agave simple syrup?

Yes, if you don't want to make a whole batch of agave simple syrup, just add 3 teaspoons of agave and 1 tablespoon water to the cocktail shaker when you are adding all the other ingredients. The caramel flavor will still come through.

How should I store extra agave syrup?

It's best stored in a glass jar with an airtight lid in the fridge. Throw an extra cinnamon stick in the jar and let the cinnamon flavor blend into the liquid!

More drinks you're sure to love! 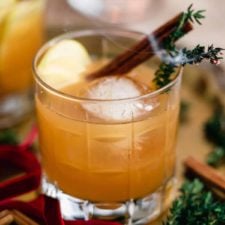 This cozy cocktail is made with fresh apple cider and bold smokey bourbon. It's the perfect drink to snuggle up with on the couch next to the fire. Each sip is full of crispy sweetness paired with a little charred toasty flavors. If you're looking for a warm & cozy libation, this bourbon apple cider cocktail is it!
4.89 from 9 votes
Print Pin Rate
Course: Drinks
Cuisine: American
Keyword: apple cider bourbon cocktail, bourbon apple cider cocktail, how to smoke cocktail glass
Prep Time: 15 minutes
Total Time: 15 minutes
Servings: 2 Cocktails
Calories: 117kcal
Author: Ansley Beutler

For the agave simple syrup

Agave syrup short cut : If you don't want to make a whole batch of agave simple syrup, just add 3 teaspoons of agave and 1 tablespoon water to the cocktail shaker when you are adding all the other ingredients. The caramel flavor will still come through. Storing agave simple syrup : Keep leftover agave simple syrup in a jar in the fridge. Easily use it in cocktails over the next few weeks!