These pumpkin cheesecake brownies scream fall with a layer of creamy pumpkin cheesecake on top of a rich fudgy brownie. You'll get a taste of chocolate and pumpkin spice in every bite! They're made gluten free and dairy free and come together quickly with the help of boxed brownie mix.

This Pumpkin Cheesecake Brownie recipe is sponsored by King Arthur. As always, all thoughts are my own. Thank you so much for supporting brands that make The Fit Peach possible!

Yes, you can make brownies with a beautiful swirl of pumpkin and it's FANTASTIC! It's like a brownie and a slice of pumpkin cheesecake all in the same bite and the ultimate ode to pumpkin season.

Step 1 : Prepare the brownie batter. First, make the brownies according to the package directions on the back of the box mix. The batter will be on the thicker side which is exactly what you want for super fudgy brownies!

Scoop out ½ cup of the brownie batter and set aside. You will use this to swirl in with the pumpkin cheesecake batter later.

Pour the remaining chocolate batter into the square baking dish lined with parchment paper. Use a rubber spatula or butter knife to even it out and then set it aside.

Step 2 : Make the pumpkin cheesecake batter. In a separate bowl, or in the bowl of a stand mixer, beat together the room temperature vegan cream cheese with the coconut sugar, pumpkin, egg yolk, and vanilla. You can se a hand mixer for this or a stand mixer or a stiff whisk. Mix until the mixture is thick and creamy.

Step 3 : Assemble. Spread the pumpkin cheesecake mixture on top of the brownie layer in the prepared pan. Use a spatula or the back of a spoon to spread it out evenly in the pan.

Bake in the oven until set. Inset a toothpick into the center of the brownies. If it comes out clean, the brownies are done.

Allow the brownies to set for at least 30 minutes before slicing. I even like to place the cooled down brownie pan in the fridge for another hour to chill. This makes it easier to cut.

Use a sharp knife to slice the brownies into squares and enjoy!

Store the brownies in an airtight container. Feel free to stack them on top of each other. They will keep for 4 days when stored on the counter or up to a week in the fridge.

How to make pumpkin brownies with brownie mix?

How do you know when pumpkin brownies are done cooking?

The pumpkin will be a darker orange color and will be set into the brownies. If you giggle the pan a little, the brownies shouldn't move too much.
The easiest way to make sure they are done is to stick a toothpick in the center. If the toothpick comes out clean then the brownies are done baking. 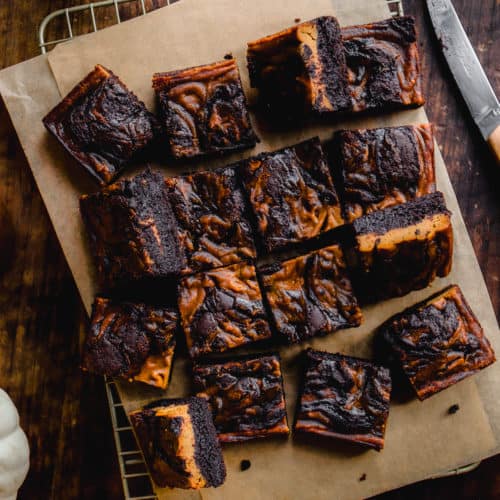 For the pumpkin cheesecake layer

Welcome to The Fit Peach! Around here you'll find simple and easy recipes & treats for the health-focused foodie. Most recipes are paleo, gluten-free, Whole30, plant-based & more!