Your favorite festive childhood treat just got an upgrade with this homemade snickerdoodle pop tart recipe! Made with a classic brown sugar cinnamon pop tart base and topped with a cream cheese frosting, this recipe is the best sweet breakfast or nostalgic dessert that both kids and adults will love.

Cinnamon pop tarts were my jam growing up. Even though we didn’t get them often, the memory of opening up that silver packaging to see two pop tarts inside still makes me hungry. However, as much as I loved (and still do) standard flavors, the special holiday editions were always something I looked forward to.

So, in an effort to bring back some of that childhood magic, I recreated my favorite sweet breakfast with this homemade snickerdoodle pop tart recipe. Made with a flaky pie dough crust, stuffed with a cinnamon sugar filling, and topped with a decadent glaze, it's pure nostalgia in every bite.

As a result, homemade snickerdoodle pop tarts are perfect for a fun Thanksgiving brunch, Christmas morning breakfast, or a sweet snow day treat!

A snickerdoodle is usually a sugar cookie rolled in cinnamon sugar. Unlike traditional sugar cookies, the base of a snickerdoodle cookie is also typically made with a pinch of cream of tartar for an added tangy flavor.

While this pop tart has a boatload of cinnamon flavor, it doesn’t contain cream of tartar. Instead, the icing is made with a little cream cheese to give it a little bit of a tang similar to that of a standard snickerdoodle cookie.

For the cinnamon pop tart base

For the snickerdoodle icing

How to Make This Homemade Snickerdoodle Pop Tart Recipe

To make this recipe, we’ll start with large sheets of dough and will slice them into individual portions once baked. You’ll need a rolling pin for the dough, a couple of mixing bowls, parchment paper, a baking sheet, and a sharp knife!

Step 1: Prepare the filling. Combine the brown sugar, cinnamon, flour, and vanilla in a bowl, and set the mixture aside.

Step 2: Roll out the dough. Spread both sheets of pie dough on a floured surface until they are roughly 8x16 inches in size. Then, transfer one of the sheets of dough to a parchment-lined baking sheet.

Step 3: Assemble the snickerdoodle pop tart. Sprinkle the cinnamon sugar filling over the dough on the baking sheet, leaving about an inch of space around the edges.

Carefully lay the second sheet of dough on top of the first, and use the back of a fork to crimp the edges and “seal” the snickerdoodle pop tart. Gently poke a few holes in the top of the pop tart.

Step 4: Bake. Brush the top of the dough with egg wash or melted butter, and bake until the dough is golden brown on top.

Step 5: Add the icing! Once the cinnamon pop tart has cooled, add the cream cheese, powdered sugar, and cinnamon to a bowl. Mix until it is smooth and thick. Then, stir in splashes of milk until your desired consistency is reached and the icing is spreadable but not runny.

Spread the icing on top of the pop tart, and let it sit for a few minutes to set. Slice the dough into individual snickerdoodle pop tarts, and enjoy!

Allow the icing to set completely before storing the sliced snickerdoodle pop tarts in an airtight container. They will keep for up to 4 days out on the counter or a week in the fridge.

You can also store an unsliced or partially sliced pop tart on a baking tray wrapped in plastic wrap. It should keep for up to 4 days.

Enjoy the pop tart at room temperature, or heat it up in the microwave or toaster oven. Keep in mind, if you heat it up the icing will soften making it a little messy but totally delicious.

Can I make this pop tart gluten free?

Yes, use gluten free pie crust, either store-bought or homemade.

Is this pop tart dairy free?

Use a dairy free cream cheese and milk as well as a dairy free pie crust to make this free of dairy. I like the  Dufour pie dough which uses palm oil for a dairy free and vegan option.

How do I make an egg wash?

Just whisk an egg in a small bowl until it is smooth! Some people also like to add a splash of water, milk, or cream,  but I don’t find this necessary for this recipe.

Check out these recipes for more fun breakfast ideas: 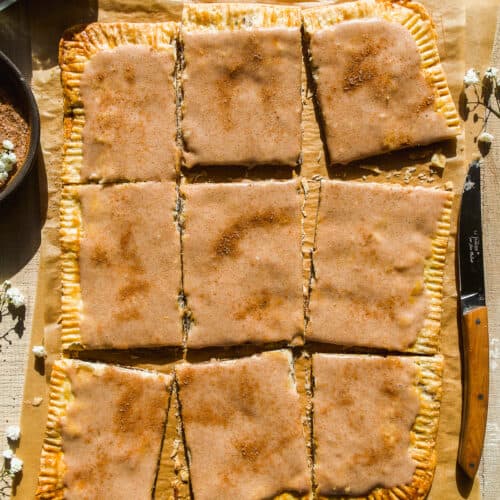