These apple pop tarts have a crispy golden brown crust, sweet apple butter filling, and a delicious cinnamon frosting. It's the perfect festive fall treat to serve for brunch that kids and adults alike will love!

Pop tarts are the quintessential childhood treat. If I were to definite 'nostalgia' I would say opening up that silver package with two frosted pop tarts in the morning before school (although we weren't allowed to have them too often).

But why do kids get to have all the fun?? These cinnamon apple pop tarts are designed for both kids AND adults and are sure to bring back some fond memories. They're filled with cinnamon flavor, similar to the brown sugar pop tarts we know and love, with an apple filling twist. Like a cinnamon apple toaster pastries in pop tart form!

The pop tart is actually baked as one giant pop tart and then sliced into pieces that make it great for serving to a crowd. Think Thanksgiving brunch, Christmas morning, or a special birthday breakfast surprise!

Why pie dough is best?

How to Make Apple Pop Tarts

You will need a skillet to cook the apples, a food processor or blender to make the apple butter, and a rolling pin and large baking sheet to assemble the giant apple pop tart.

Step 1 : Cook the apples. Dice up the apples into small pieces and add them to a skillet with the butter, apple cider, cinnamon, nutmeg, and cloves. Cook on medium low with the lid on top of the skillet until the apples get warm and soft. This will take about 10 minutes.

Step 2 : Make the apple butter. Once the apples are soft, scoop them into a blender or food processor. Try to leave behind most of the juices in the skillet. Blend up the apples until they reach a jam like consistency and there aren't any large chunks of apple left.

Step 3 : Roll out the dough. Take one of the pieces of pie dough, or use half of the dough if you made it from scratch, and roll it out on a piece of lightly flowered parchment paper. Roll it out into an 8 x 12 large rectangle about ¼ inch in thickness.

Do the same thing with the other half of the dough on a separate piece of parchment paper.

Use a fork to crimp the edges of the pop tart all around. This is what keeps the filling inside. Poke a few holes into the top layer of the pop tart so air has somewhere to escape in the oven.

Brush the entire thing with an egg wash, if desired, and bake in the oven until golden brown.

Step 5 : Add the frosting! First, make sure the pop tart has cooled down slightly before adding the frosting. It's okay if it's slightly warm but you don't want it piping hot or the frosting will melt. I personally like to wait until it's at room temperature.

In a small bowl, whisk together the powdered sugar, cinnamon, nutmeg, cloves, and apple cider until smooth.

Pour the frosting on top of the pop tart and use the back of a spoon or rubber spatula to spread it almost to the edges.

Sprinkle some coarse cane sugar on top, if desired. The icing will set within 10 minutes and then you can use a sharp knife to cut large rectangles to make individual pop tarts and enjoy!

Can I Make Individual Pop Tarts?

It's easy to make these into smaller individual crisp apple pop tarts. Simply follow the steps as directed but slice the dough into 3 x 4 inch rectangles after you have rolled out the dough. Fill half of the rectangles with the apple filling and place another rectangular piece on top. Make sure to seal the edges and poke a few holes in top and bake! I recommend shaving a few minutes off the baking time if you're making smaller pop tarts. Start with 10 minutes and check them to see if they're golden brown enough.

Make sure the frosting has set completely before storing the pop tarts in an airtight container. Place a layer of parchment paper in between the pop tarts if you want to stack them on top of one another or wrap each individual pop tart in plastic wrap.

They will keep for up to 4 days in the fridge or a couple of days out on the counter. I like to enjoy them chilled but if you want to heat them up, I recommend toasting them to get the edges nice and crispy.

Can I use store bought pastry dough?

Yes, I used store bought pie dough to make things easy. If you use store bought dough, make sure you have two pieces that you can roll out into a rectangles.

How can I make this dairy free?

Use a vegan pie dough and vegan butter to make this recipe entirely dairy free.

Can I make these apple pop tarts gluten free?

Check out these recipes for more fall fun: 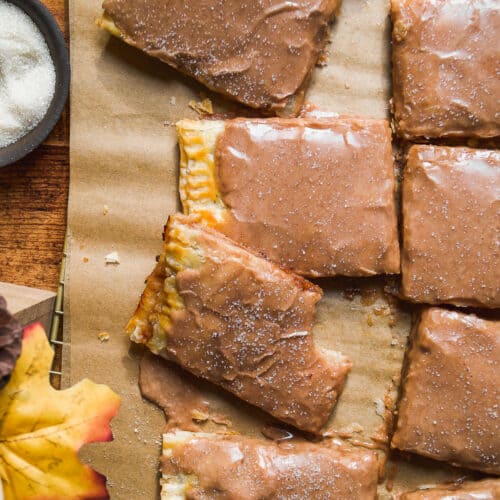 Pastry dough - You can use a variety of dough for these apple pop tarts. I used store bought pie dough to make things simple (both the Pillsbury pie dough and Dufour vegan pie dough work well). You can also make your own pie dough or use my almond flour pop tart dough recipe.