Yes, healthy almond flour cinnamon rolls do exist! They're so tender and fluffy with a sweet cinnamon filling loaded with hints of pure maple and chopped pecans. Each one is smothered in a dairy free & vegan cream cheese icing and can be made in under an hour with no yeast!

Have you ever dreamed of a world with a healthy version of a warm, fluffy, cinnamon roll? (Me, just about every day for the past 10 years). Well, let me rock your world with these ooey, gooey, oh so fluffy cinnamon rolls that are perfect for the weekend, a holiday brunch, or just because!

They're made with almond flour and coconut sugar and dairy free cream cheese and even more wholesome, natural ingredients. Get your apron and rolling pin out because you most definitely need these in your life.

And don't let the words 'almond flour' deter you. These babies are insanely soft and moist just like the real deal!

To make these healthy cinnamon rolls, you will need a hand mixer and a bowl or a stand mixer, parchment paper, rolling pin, and a dish to bake them in.

In a bowl, beat together the coconut milk, apple cider vinegar, maple syrup, and honey. Mix well until fully incorporated and smooth in consistency.

Add the almond flour, tapioca flour, baking powder, and baking soda. Continue to mix until a large ball of dough forms. The dough will be slightly sticky at this point.

Let the dough rest in the bowl while you prepare the filling. In a bowl, add the melted coconut oil, coconut sugar, maple syrup, cinnamon, and chopped pecans. Mix with a fork or a spatula until the the pecans are well coated in the mixture. Set aside.

Step 4 : Roll out the dough

On a flat surface, play down a long piece of parchment paper. This is key and will make rolling up the cinnamon rolls so much easier.

Sprinkle a little extra tapioca flour over the parchment paper and roll out the dough into a rectangle about ½ inch in thickness.

Spread the filling over the dough, leaving some room around the sides to prevent it from seeping out of the cinnamon rolls. Sprinkle some extra cinnamon over top of the filling for good measure.

This is where your skills will be tested. Gluten free dough can be finicky (we know that). The trick is to use the parchment paper to help guide the dough into a roll - see image below.

Once yo get to the end, gently press down on the edge of the dough to seal it into the log shape.

The best and easiest way to slice the dough into individual cinnamon rolls is with a string or floss. If you use floss just make sure it's not mint flavored.

Wedge the string under the log about 2 inches from the end. Pull the string upwards, cross, and pull down slicing the dough into pieces. Repeat this process. You should be left with 11 - 12 2 inch cinnamon rolls.

Place each cinnamon roll into a baking dish leaving a little bit of room in between each one. I used a pie dish here but you can also use a square baking pan.

Bake in the oven until the cinnamon rolls have risen and are starting to turn golden brown on top.

To make the icing, simply add the ingredients to a medium sized bowl and mix well with a spoon or whisk until smooth. This is why room temperature cream cheese is important. It should seamlessly mix with the liquids to create a thick smooth icing.

Pour the icing over top of each cinnamon roll and let it run off the sides.

To save some of these healthy cinnamon rolls for later, place them in an air tight container where they will keep for 3 days out on the counter and 5 days in the fridge. If you chose to store them in the fridge, warm them up in the microwave in 10 second intervals when ready to enjoy.

You can store them with or without the icing. To store the icing separately, pour it into a glass jar with a lid and keep it in the fridge. Warm it up in the microwave for 15 seconds until it's thin enough to run off the back of a spoon. Then pour over your warm cinnamon roll.

Are these cinnamon rolls gluten free and vegan?

Yes! These cinnamon rolls are made with almond flour making them naturally gluten free and contain no dairy or eggs so they are vegan too!

Can I make these ahead of time?

Yes, the dough keeps well in the fridge so you can easily pop them in the oven in the morning and have fresh baked cinnamon rolls! Follow the recipe as directed, place them in a dish and wrap it tight with saran wrap to keep it air tight. Bake as directed in the morning.

Can I freeze the cinnamon rolls?

Yes, you can freeze the dough once you have assembled the cinnamon rolls. Wrap each roll in plastic wrap and store in a freezer bag to prevent freezer burn. When ready to enjoy, thaw out on the counter or in the fridge overnight until soft. Once soft bake in the oven as directed.

Unfortunately no, at this time Pillsbury does not have gluten free cinnamon rolls.

For more healthy baking recipes, check out my: 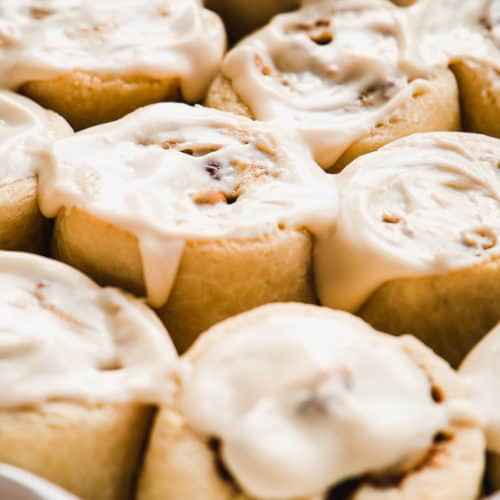 For the Maple Pecan Filling

For the Cream Cheese Icing

Making ahead of time : Follow the steps as directed above to assemble the cinnamon rolls. Instead of baking them though, place each roll in an airtight container in the fridge. In the morning, place them in a baking dish and bake for fresh baked cinnamon rolls! Storing : To save some of these cinnamon rolls for later, place them in an air tight container (with or without icing on top) where they will keep for 3 days out on the counter and 5 days in the fridge. If you chose to store them in the fridge, warm them up in the microwave in 10 second intervals when ready to enjoy. If you are storing the icing, transfer it to a glass jar and store in the fridge. Warm up in the microwave to thin it out and drizzle over warm cinnamon roll. Freezing : To freeze the cinnamon roll dough, wrap each roll in plastic wrap and store in a freezer bag to prevent freezer burn. When ready to enjoy, thaw out on the counter or in the fridge overnight until soft. Once soft bake in the oven as directed.